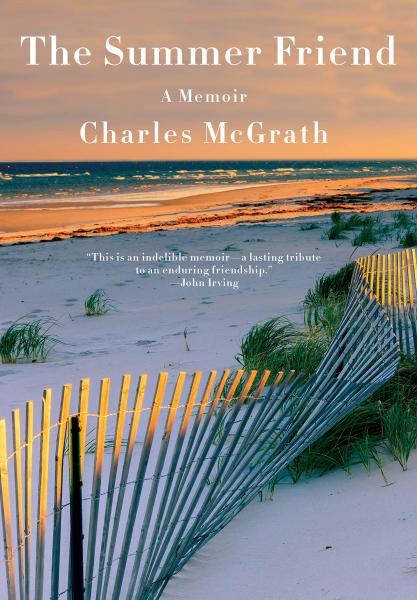 Chip McGrath will be in conversation with our own Dan Chartrand. Join us for what will be a great event!

Alive with the intoxicating magic of summer in New England, former editor of the New York Times Book Review Charles McGrath's evocative memoir looks back at that sun-soaked season, at family, youth, and a singular bond made at a time when he thought he was beyond making friends.

"To read Chip McGrath's gentle, elegant memoir ... is to lose yourself in your own past summers, especially the ones of your youth, when you imagined there'd be an infinite number of them, and also friends to share those summers with. That both turn out to be numbered makes this book positively ache with beauty and loss." --Richard Russo

It was early evening and a new acquaintance had come to retrieve his daughter from a play date. Instead of driving up in a minivan, he arrived by water, tacking his sailboat smartly across a squiggly channel in the marsh, throwing a rope overboard, and zipping back home, his gleeful daughter riding in the wake. Who knew you could do such a thing? And how could you resist befriending a man such as that?

Over the course of this rich memoir, McGrath recalls with a gimlet eye the pleasures of summers past: amateur lobstering, 9-hole golf, family costume charades, bridge-jumping, and a friendship forged between two men from different backgrounds who came together late in life.

Recounting the vagaries of summer with such precision and warmth-- peeling long strips of sunburnt skin from your shoulder as if "shuffling off your own cocoon," the outdoor shower curtain blowing open in the breeze, an M80 firework in the mailbox-- The Summer Friend is simultaneously a potent evocation of the rhythms and rituals of summer and a stirring remembrance of a friend found and then lost.

Charles McGrath, known as Chip, is the former deputy editor of The New Yorker and a former editor of The New York Times Book Review, and is currently a contributing writer at The Times. He is the editor of Golf Stories, two Library of America volumes, and an occasional contributor to Golf Digest. He lives with his wife in northern New Jersey and southeastern Massachusetts.

The Summer Friend: A Memoir (Hardcover)