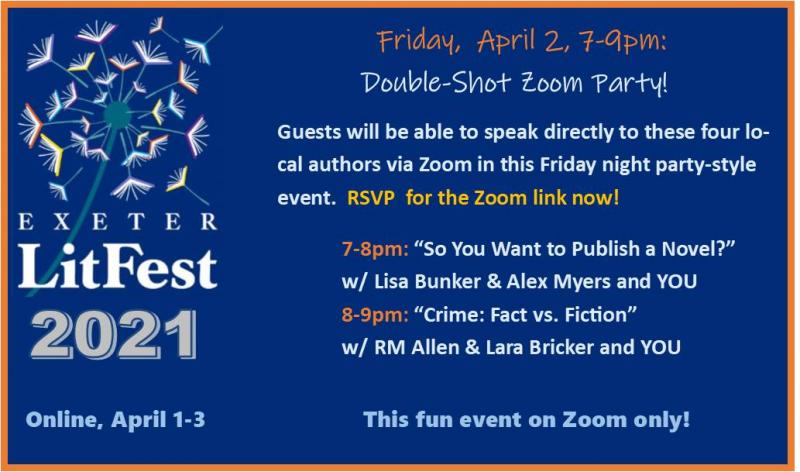 To sign up for this "meeting style" event, email us at exeterlitfest @ gmail.com!

Lisa Bunker lives in Exeter, New Hampshire. Before taking up writing full time, she had a thirty-year career in public and community radio. In November of 2018, she was elected to represent her town in the New Hampshire House of Representatives. She is married and has two grown children. Her geekeries include chess, piano, gender, storycraft, and language.

Alex Myers is a writer, teacher, and speaker. Born and raised in Paris, Maine, Alex was raised as a girl (Alice) and left Maine to attend boarding school at Phillips Exeter Academy. At Exeter, Alex came out as transgender, returning his senior year as a man after attending for three years as a woman, and was the first transgender student in that Academy's history. After Exeter, Alex earned his bachelor's at Harvard University, studying Near Eastern Languages and Civilizations. Alex was also the first openly transgender student at Harvard and worked to change the University's nondiscrimination clause to include gender identity. Subsequent to earning a master's degree in religion at Brown, Alex has pursued a career in teaching, as a transgender advocate, and as an active journalist contributing to the Guardian, THEM and other publications. He currently lives in New Hampshire with his wife and two cats. The Story of Silence is his first book for Voyager.

Lara Bricker is a journalist, podcaster, true crime author, former private investigator and certified cat detective. She is a member of the Crime Writers On... podcast team. She has been writing and reporting on crime and justice issues since 1998. Her work has appeared in the Portsmouth Herald, the Exeter News-Letter, the Hampton Union, the New Hampshire Union Leader, Woman's World magazine, and the Boston Globe. In 2008, she covered the first death penalty case to go to trial in New Hampshire in almost fifty years for the Associated Press. Lara is the author of the true crime hit Lie after Lie: The True Story of a Master of Deception, Betrayal, and Murder.

RM Allen is the author of a historical-fiction trilogy set in Exeter, NH. "Incident at Ioka" (July 2020) and “Incident at Exeter Tavern” (Jan 2020) and "Incident at Exeter Depot" (March 2021). Through these books she shows what has been hidden in plain sight for all these years. All profits will be donated to a physical commemoration of that historic Black community, which included Black Revolutionary War soldiers, and existed for one hundred years. Her previous three books are a series of small feminine spirituality books (published 2011-2016) that serve as guides for women looking to reinvent or re-inspire themselves using their own intuitive inner goddess: “New Hampshire Goddess Chronicles” volumes 1-3. She feels that when women are happy and empowered, it spreads to their family, their community, and so on…and the world becomes a more peaceful place. She is also the founder of the town’s annual literary festival which celebrates the diverse voices of Exeter authors, past and present.

The Story of Silence (Hardcover)

Lie After Lie: The True Story of A Master of Deception, Betrayal, and Murder (Mass Market)