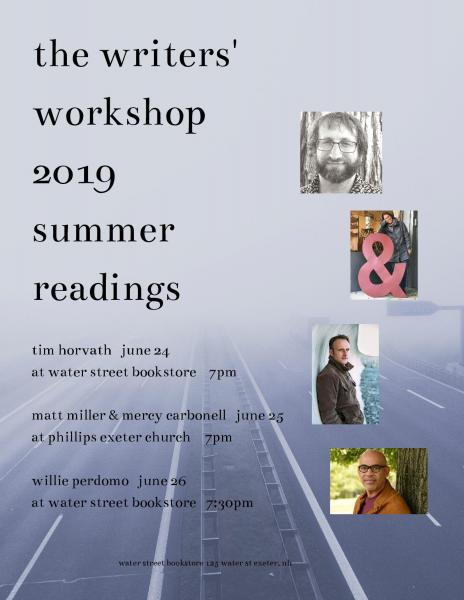 Matt W Miller was born and raised in Lowell, Massachusetts. He is the author of The Wounded for the Water (Salmon Poetry) , Club Icarus (University of North Texas Press), selected by Major Jackson as the 2012 Vassar Miller Poetry Prize winner, and Cameo Diner: Poems (Loom). He has published work previously in Slate, Harvard Review, Notre Dame Review, Southwest Review, Southeast Review, Florida Review, Third Coast, The Rumpus, Poetry Daily, and other journals. He was winner of the 2015 River Styx Micro-Beer, Micro-fiction Prize and Iron Horse Review's 2015 Trifecta Poetry Prize. He has been awarded a Wallace Stegner Fellowship in Poetry and a Walter E. Dakin Fellowship in Poetry from Sewanee Writers' Conference. He has taught creative writing and literature at Stanford University, University of Massachusetts Lowell, New England College, Harvard Extension and the Concord State Prison for Men. He teaches English and coaches football at Phillips Exeter Academy where he also co-directs the Writers’ Workshop at Exeter. He lives in New Hampshire with his wife Emily Meehan and their children Delaney and Joseph.

Mercy Carbonell grew up in Chadds Ford, Pennsylvania, and earned her B.A. in English from Brown University, where she played varsity squash, studied literary theory and literature and art, and wrote her honors thesis titled “The Implications of Language in Joan Didion's Play It as It Lays: A Personal Essay in Feminist Criticism.” Mercy holds a master’s in education from Stanford University, where she specialized in teaching writing using the Harkness method developed at Phillips Exeter Academy and studied alternative forms of assessment for student writing and curricular design.

As a member of the English faculty at Phillips Exeter from 1993-1996 and 2000 to the present, she regularly teaches the Advanced Senior Creative Writing Workshop, as well as writing workshops for parents of the Academy and a Saturday class on writing for members of the Exeter community. Mercy has developed writing workshops for student speakers for the annual MLK Day Assembly, directed and co-authored the 25th-anniversary Title IX Assembly, directed and delivered a National Coming Out Day Assembly, submitted art combining text and image for the Faculty Art Installation in the Gallery, and has delivered five Meditations to the Academy community in Phillips Church, one of which was published in Book of Meditations II. From 1997-2000 she taught English and creative writing at Milton Academy in Massachusetts. At Exeter, Mercy serves as a member of the MLK Day Committee and Learning About Learning Committee, and as head coach of the girls varsity field hockey and girls varsity lacrosse teams. She is currently working on a text-and-image photojournalism memory-archive project about girls and sports at PEA.

This event is presented by Phillips Exeter Academy's Writers' Workshop and is open to the public.

The Wounded for the Water (Paperback)