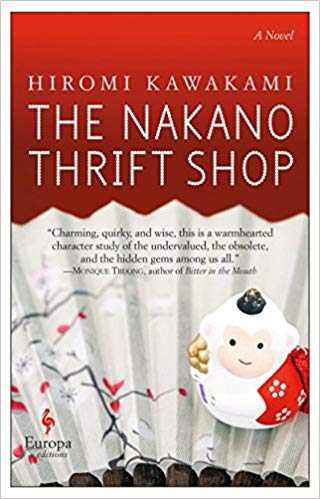 Join us for the next month of our new book group, READ MORE WOMEN. We meet at the bookstore on the last Tuesday of the month from 7-8pm to discuss books written by women from different countries around the world. June's book is The Nakano Thrift Shop by Hiromi Kawakami (Japan).

From the author of Strange Weather in Tokyo comes this funny, heartwarming story about love, life, and human relationships that features a delightfully offbeat cast of characters.

Objects for sale at the Nakano Thrift Shop appear as commonplace as the staff and customers that handle them. But like those same customers and staff, they hold many secrets. If examined carefully, they show the signs of innumerable extravagancies, of immeasurable pleasure and pain, and of the deep mysteries of the human heart.

Hitomi, the inexperienced young woman who works the register at Mr. Nakano's thrift shop, has fallen for her coworker, the oddly reserved Takeo. Unsure of how to attract his attention, she seeks advice from her employer's sister, Masayo, whose sentimental entanglements make her a somewhat unconventional guide. But thanks in part to Masayo, Hitomi will come to realize that love, desire, and intimacy require acceptance not only of idiosyncrasies but also of the delicate waltz between open and hidden secrets.

Bestselling author Hiromi Kawakami has won acclaim for her essays, stories, and novels. Her short fiction has appeared in English in The Paris Review and Granta. Her novel Strange Weather in Tokyo was shortlisted for the 2013 Man Asian Literary Prize and the 2014 International Foreign Fiction Prize. She lives in Japan.

Allison Markin Powell is a literary translator and editor in New York City. Her translations include works by Osamu Dazai, Fuminori Nakamura, and Kanako Nishi, and she was the guest editor for the first Japan issue of Words Without Borders. She maintains the database Japanese Literature in English at www.japaneseliteratureinenglish.com.